The Bujinkan organization incorporates the teachings of the martial arts lineages that Masaaki Hatsumi learned from Takamatsu Toshitsugu under the banner of Bujinkan Budo Taijutsu. These are:

Bujinkan training aims to develop the ability to protect oneself and others using techniques that focus on disabling an attacker (&/or removing their desire/ability to continue) as efficiently as possible. The approach used in the Bujinkan may include gaining compliance through pain and utilizing potentially damaging techniques in order to survive dangerous situations, rather than focusing on winning a competition or evenly matched duel. However, training is always performed in a slow, controlled manner so that training injuries are unlikely.
The Bujinkan focuses on taijutsu (body movement / skills) as well as other skills of ninjutsu (ninpo tactics and strategies) and happo biken jutsu (various modern and traditional weapons).

In the Bujinkan, rankings are given by the head instructor, and are based on personal progress rather than by meeting specific goals. A student begins as a white belt, or Mukyu, meaning no rank. Then they progress through the nine levels of green belt, or kyu ranks. Next there are fifteen dan levels, represented by a black belt. An instructor can rank a student up to 4th dan and then the student must go to Japan to test for the 5th dan. All 5th dans and above are considered Shidoshi, or licensed teachers, and are allowed to run their own school. Typical students who train regularly can expect to remain a white belt for several months and achieve a black belt after 2-5 years of training. 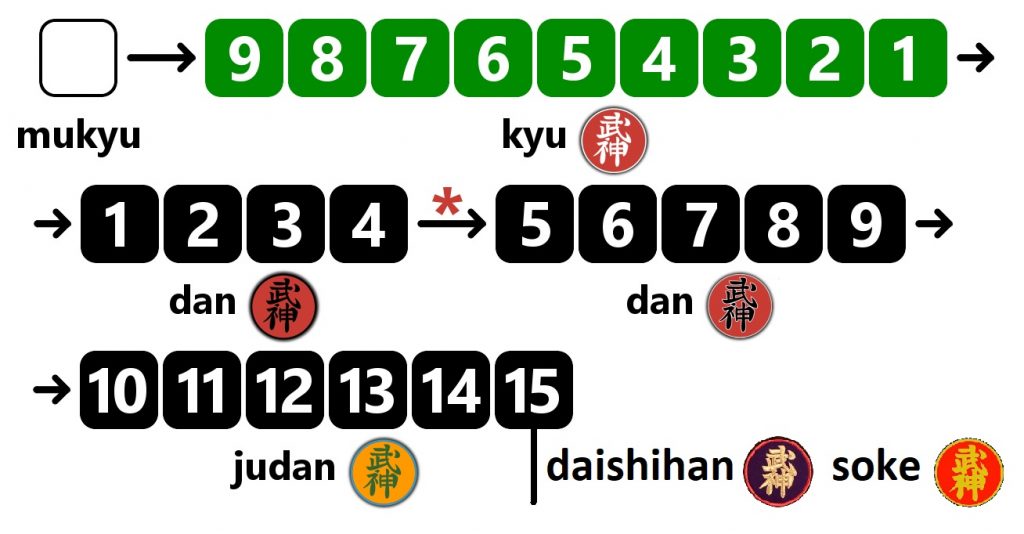